I have some exciting news! I’m PREGNANT! That’s right. Believe it!

Now your friendly neighborhood n0n-domestic, non-maternal, non-conformist rock star gets to be referred to with fun-loving, suburban terminology such as preggers, preggo and my personal favorite, knocked up.

I’m so excited I can’t stand myself!

So I decided to start being more maternal, at least til the instincts kick in. Today I’ve decided to make dinner. No, not the microwaveable kind, the delivered kind or the “Mom can you come over and make it look like I cooked this kind.”

I’m actually making a REAL dinner. For those of you who know me, this is a feat in and of itself.

I’ve decided to attempt roasting a chicken. First I removed the giblet bag.

My windows were open and my neighbor walked by. 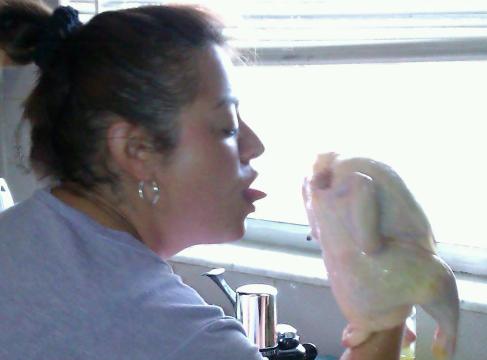 My neighbor wasn’t quite sold on the awesome mom bit. But then I showed him my burping stance.

He seemed to think a baby is sooooo different from a chicken. But what does he know?

I think my maternal instincts are kicking in already. Even Bacchus was impressed.

Or maybe he was just mesmerized by the smell of raw chicken. \

Next I gently rubbed my chicken down with Jamaican Pimento rub that Dewey picked out. At first I was skeptical, but it smelled like A1 sauce.

So I rolled with it.

Dewey came home. Evidently you’re only supposed to use a tablespoon of the rub NOT the whole bottle.

Oh and the lock on the oven is NOT to keep the chicken from escaping; it’s for when the oven self-cleans. I just think it’s cool that ovens clean themselves.

I am a professional…